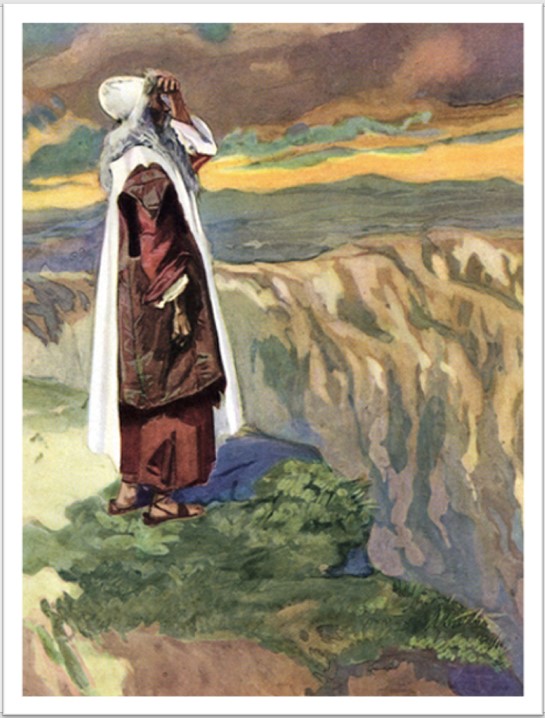 Midway through the second act of the Broadway musical Hamilton, our nation’s first Secretary of the Treasury, Alexander Hamilton, is summoned to the office of his Commander in Chief, George Washington. The two have a history together dating back to Hamilton’s role as an aide-de-camp to General Washington’s continental army during the Revolutionary War. In the parlance of the musical, Hamilton is Washington’s right-hand man. But now Washington must break the news to his protégé that his second term as President will be his last, and he wants his help drafting a farewell address. “We’ll teach ‘em how to say,’goodbye’,” he tells Hamilton. Hamilton is having none of it, “as far as the people are concerned,” he argues, “you have to serve, you could continue to serve.”

In our reading this morning from what is not only the final chapter of the book of Deuteronomy, but the conclusion to the Torah, or the Law of Moses, Moses is shown the land promised to his ancestors, the land he had spent the last 40 years with the people of Israel moving toward. It is the last thing that he will see before he dies. And there is curious detail in the text. Sometimes we forget that the bible isn’t like other books that we might read. While it rehearses the salvation history of God over hundreds of years, it isn’t quite a historical novel, or even a work of history- strictly speaking. The details that we rely on to get a more accurate picture of what happened and how aren’t as forthcoming in scripture. That really isn’t how scripture works. So, when we do get an explanation about how even when he dies at the age of 120, Moses eyesight is unimpaired and his vigor unabated, it’s worth exploring. Why is that important to know? Is it the kind of vanity you sometimes see in people who don’t want to admit their own frailty, afraid to reveal any weakness to others? I don’t think so. In some ways I think it has something to do with the fact that God is only allowing Moses to see the land that the people are about to enter into, instead of letting Moses go with them to lead the way, as he had for the past forty years. As far as the people are concerned, Moses has to serve, he could continue to serve. His eyesight is unimpaired and his vigor unabated.

The question Hamilton asks Washington is not unlike the question I imagine the people had for Moses. “Why do you have to say goodbye?” Only it turns out that is less a question for Moses, and more a question for God. Because it is God who has decided that Moses won’t get to enter the land. To hear that his eyesight was unimpaired and his vigor unabated tells us that it wasn’t simply that Moses had gotten too old for the job. He wasn’t kept from entering the land because he lacked the vision and the energy to keep going. The specific reason has to do with water, a rock, the instruction God gave to Moses for extracting water from that rock, and Moses’ own idea for how to do it. Moses had been God’s loyal servant for decades, even arguing for the survival of the people when God was ready to end them for their disobedience. God had been ready to scrap the whole project with the people and start over with Moses. But Moses talked God out of it. So why does one minor infraction get Moses barred from the big finish? Doesn’t God’s right-hand man deserve better than that? Unless there’s more to all of this than water and a rock. Washington’s answer about why he is saying goodbye may hold some of the same reason for God ending Moses leadership of the people on the top of Mount Nebo. “If I say goodbye,” Washington reasons, “the nation learns to move on. It outlives me when I’m gone.”

It was never about the water. It was about taking matters into his own hands. It was about making the assumption that if you do something once, that’s the way it’s always got to be done. It was about Moses thinking that he knew better than God how to do the thing that God had told Moses to do. In other words, it was about who exactly had led the people up out of the land of Egypt, and who it was that was going with them into the land that God had promised their ancestors. Make no mistake, Moses had been instrumental in leading the people through it all, just like Moses had been instrumental in stretching out his hand at the edge of the Red Sea. But in the end, it was God who parted those waters. It was God who led the people out of Egypt with a mighty hand. It was God who gave them the law in the wilderness, who sustained them with manna each and every day. But it is all too easy to confuse the importance of one person with the larger movement of God through that person to bring about all that God desires for God’s people. As important as strong and faithful leadership is to the purposes of God, when we put our faith in that, when we put our faith in what one person can do instead of what it is that God might be doing through them, we cut ourselves off from the larger promises of God. As important as Moses is to this story, to the story of liberation from slavery and their journey through the wilderness, it was never about Moses, either.

Likewise, on this Reformation Sunday, as grateful as we are for all the saints of the reformation who in many ways were instrumental in leading God’s people out of the dark days of the medieval church, we recognize that they were simply instruments for something greater that God was doing by the work of the Spirit. Perhaps that is why the most memorable thing to come out of the Reformation isn’t our reverence for Calvin, or Luther, and the many faithful women and men who led alongside them. The most memorable thing to come out of the Reformation is the sentence that directs our attention where it should be all along. Ecclesia reformata, Semper reformanda est, or the church reformed is always being reformed, according to the Word of God and the call of the Spirit. That doesn’t mean that being the church is about innovation for innovation’s sake. It means that we aren’t here to be right. We are here to get it right, to always be open to the ways in which the Word and Spirit of God may be leading us into something new, leading us as we are formed, and then re-formed again and again. It isn’t about doing it once, deciding we’ve got it down and saying, “thanks God, we’ll take it from here.” Sometimes it means recognizing when one person is starting to become more important than the mission itself and saying, ‘goodbye,’ in order to move into what comes next.

That can be hard. Especially with someone like Moses, whose vision is unimpaired, and vigor is unabated even at 120-years-old. The fact that God prevents him from entering the land is often read and understood as a form of punishment for Moses’ failure to obey God in obtaining water from the rock. But here on Mount Nebo he is shown that while he may not get to enter the land with God’s people, his work wasn’t for nothing. He is shown that land that they will enter. That won’t be the end of the story. It never is. Moses is saying goodbye so that Israel can learn to move on, so that they will know that they will outlive him once he is gone. They will outlive him when he’s gone because it never really was about him. It always about what God has done and will continue to do in forming and re-forming God’s people. The novelist Walker Percy once said that the greatest argument for the existence of God was the Jewish people themselves; that, given the historic persecution and repeated attempts to destroy them, it was clear that God was upholding the covenant made so very long ago. Likewise, theologian Paul Tillich observed that the greatest proof of the resurrection is the church itself; that if Jesus had not risen indeed, there was no way the church would have survived. Leaders come, and leaders go, but time and again we see that the people of God are formed and re-formed according to God’s Word. The people of God are formed and re-formed according to the call of God’s Spirit.

Maybe God buried Moses with no marker to commemorate his grave so that we wouldn’t linger too long on what is dead and buried. That we truly honor those who brought us this far by moving into what they saw for us, what God had shown them that drove them to do what they did, until it comes time for us to say goodbye too, knowing that even then the story is far from over.