A large number of people followed him, including women who mourned and wailed for him. Jesus turned and said to them, “Daughters of Jerusalem, do not weep for me; weep for yourselves and for your children. For the time will come when you will say, ‘Blessed are the childless women, the wombs that never bore and the breasts that never nursed!’ Then they will say to the mountains, ‘Fall on us!’ and to the hills, ‘Cover us!’ For if people do these things when the tree is green, what will happen when it is dry?” 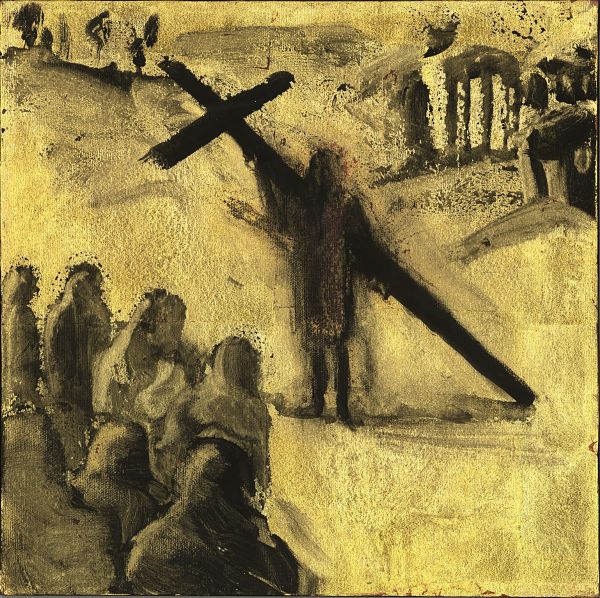 When Jesus wept the falling tear in mercy flowed beyond all bound.

When Jesus groaned, a trembling fear seized all the guilty world around.

At this point in the story, the role of the crowd is simply to witness to the events taking place. According to the custom of the day, women mourners had an unofficial but socially recognized role in burial rituals. They would accompany the survivors in the procession. Poor widows were often in this procession as they hoped to receive a coin for their efforts. In the case of political executions, family and friends would sometimes be absent, so they would not be seen as guilty also. Traditionally, the women who were barren were seen as cursed. In other places in the Bible, God turns the curse of barrenness into the blessing of children. But in this tragic reversal, Jesus tells the barren that they are now blessed because their children will not endure the horrible sufferings that are to come. The coming destruction will be worse than his own death. Jesus goes to the cross, offering his final lament over Jerusalem. He cannot save himself; he cannot save the innocent women and children. Everything is lost.

O God, give us voice and strength and hope enough to pray when it seems that everything is lost. Amen.