Station 1: Jesus Is Sentenced to Death

Pilate then called together the chief priests, the leaders, and the people, and said to them, ‘You brought me this man as one who was perverting the people; and here I have examined him in your presence and have not found this man guilty of any of your charges against him. Neither has Herod, for he sent him back to us. Indeed, he has done nothing to deserve death. I will therefore have him flogged and release him.’

Then they all shouted out together, ‘Away with this fellow! Release Barabbas for us!’ (This was a man who had been put in prison for an insurrection that had taken place in the city, and for murder.) Pilate, wanting to release Jesus, addressed them again; but they kept shouting, ‘Crucify, crucify him!’ A third time he said to them, ‘Why, what evil has he done? I have found in him no ground for the sentence of death; I will therefore have him flogged and then release him.’ But they kept urgently demanding with loud shouts that he should be crucified; and their voices prevailed. So Pilate gave his verdict that their demand should be granted. He released the man they asked for, the one who had been put in prison for insurrection and murder, and he handed Jesus over as they wished. 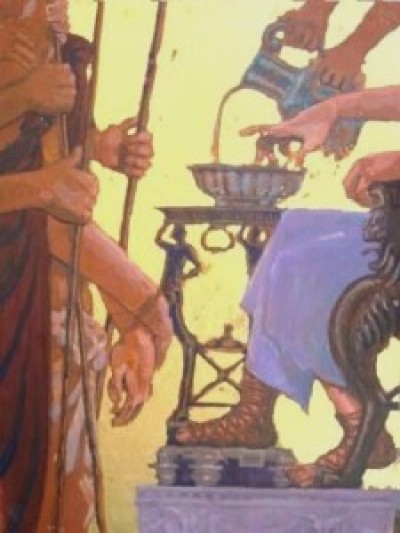 The first station is a sober reminder that not only was Jesus’ death unnatural, it was a political act. We wish it wasn’t so. We wish our spiritual lives could be kept separate and compartmentalized from the political machinations of our world. But earthly authority does not yield easily to the indiscriminate mercies of God seen in the one who touched the untouchable, ate with the wrong people, and eschewed violence in favor of reconciliation and peace. To walk the way of the cross is to encounter the condemnation of worldly power.

Almighty God, yours is a power made perfect in weakness. May we stand with all who are unjustly condemned to die and refuse to wash our hands of such guilty acts; that in their suffering we might see and know Christ’s presence with the wrongfully accused. Amen