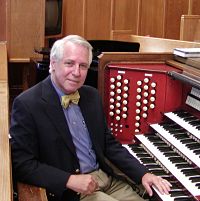 James Yeager has performed regularly as conductor, organist, harpsichordist, and choral accompanist in central Ohio and beyond. Recently retired, he was Professor of Sacred Music and Director of Music at the Josephinum College in Columbus, Ohio (since 1984) where he created an extensive curriculum and program of sacred music. His first love in music is the pipe organ—its mechanisms, its history, and repertoire. He is particularly devoted to organ pedagogy and the encouragement of organ study. He directed the Josephinum Choir, the Brass Ensemble, and a Gregorian Chant Schola Cantorum. The Josephinum Choir, a thirty-five voice male chorus, produced its third professional CD in 2006, Viva Roma! The Josephinum Choir at Home and Abroad. The choir toured Europe in the summers of 2003 and 2005. At the college Dr. Yeager founded a performing arts series called i Fiori Musicali, now in its twenty-first season on the campus. He taught the Liturgical Music Seminar at St. John’s University in Collegeville, Minnesota (in recent summers) and has presented workshops on sacred music in Wichita and Columbus. In addition to his teaching, Dr. Yeager is a past Dean of the Columbus Chapter of the American Guild of Organists (AGO) and currently serves on the AGO national Task Force for the Part Time Church Musician. Dr. Yeager holds a Bachelor of Music from The Ohio State University, a Master of Sacred Music from Union Theological Seminary—New York, and a Doctor of Musical Arts from the University of Colorado—Boulder. He studied harpsichord in Paris with Dr. Davitt Moroney in 1982. In 1997, during a six-month sabbatical leave, he studied improvisation at the organ with Dr. Naji Hakim, Organist Titulaire at St. Trinité Church, Paris. Among other things in retirement, he has rekindled his interest in model railroading. He currently resides in Mountainair, New Mexico with his wife, Elaine Zabor, who currently works part-time as a contractor with the New Mexico Public Education Department evaluating No Child Left Behind after school programs. Elaine’s current passion is the remediation of their desert acreage with wild grasses and other xeric plants.