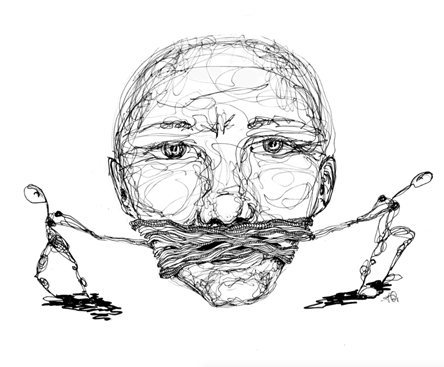 My parents have always been the kind of people who like to buy certain kinds of gifts for people with small children. They take an almost sadistic delight in finding toys that allow a child to make as much noise as humanly possible; drums, bells, horns, you name it. I can only guess their motives. Maybe it’s payback for the noise they had to endure raising my brother and me. I don’t know. One toy in particular achieved such legendary status in our family that I hesitated to get rid of it when it finally came time to cull our childrens’ toys. It was a Christmas present for Miranda when she was still an only child at on-and-a-half years old. That was our first Christmas away at seminary in Austin; away from our families, away from what had been our home. New Orleans is only a day’s drive from Austin, so we decided we’d head that direction to spend the holiday with our family that lived there. But we were a little nervous about being in the car that long with a very vocal toddler. After careful deliberation, we decide that we’d open one of her Christmas gifts early, in order to keep her occupied on the drive. So, we picked the one that was from Grandma and Grandpa. From the shape of it, we could tell that it would likely do the trick. We helped tear off the paper to reveal a “talking” alphabet bus with an assortment of animal passengers who gave clues and shared letter-related jokes and riddles. “What do you call an upside down ‘Z’,” asked the duck, before giving the answer, “It’s still ‘Z’! Quack, quack, quack.” That toy was a Godsend… for about the first five or six hours in the car. Then it became a steady annoyance. And then, somewhere along Interstate 10, over the Atchafalaya swamp, it became a toss-up. Listen to the cranky, bored toddler fuss, or hear that stupid duck quack about ‘Z’ one more time? Some gifts can be both a blessing and a curse.

That is the them, really, of any good superhero story. Spiderman has always been my favorite. The hapless, geeky Peter Parker gets bitten by a radioactive spider and suddenly inherits all kinds of spider-like attributes. He has a spider’s proportional strength, the ability to stick to the side of a building, and an extra sense that tingles to warn him of potential danger. But for all his extraordinary gifts, he still struggles. In his origin story, he uses his newfound powers in a wrestling match to help earn a little spending money and in the process contributes to the death of his beloved Uncle Ben, who helped raise him. The words of their last conversation come to haunt him, “with great power comes great responsibility. This is my gift,” he narrates at the end of one of the movies, “my curse.”

In our reading from James this morning, we are counseled not to underestimate our own particular superpower, the human tongue. Like a bit and bridle on a horse, or the rudder of a ship, our tongues- or, more accurately, our words- have the power to control our destiny, according to James. Now remember, back when this letter was first set to paper, the idea that one day, words could be quickly exchanged around the world through text and instant messaging, blogs, or email, would have sounded like something beyond science fiction. In fact, basic literacy was the exception, not the norm for most people back then. Everybody else relied almost exclusively on human speech for information. Nowadays, the means we have of communicating feel limitless, but the caution is still the same. Words are a gift with great power, and with them comes great responsibility. The power of speech lies at the very heart of the first creation story in the book of Genesis. God speaks creation into being. God says, “Let there be light, the cosmos, the earth and life that teems in the seas, on the land, and in the skies. Finally, God speaks into being a reflection of God’s own self, and gives this creature the unprecedented power of speech, to create world of its own imagining.  As runners we are unremarkable and prone to injury. As swimmers we’re even less impressive. Our bodies sport a scandalous lack of fur to protect us from the elements, and our senses generally pale in comparison to the rest of the animal kingdom. Yet, no other creature has our remarkable capacity for thoughtful speech. It is nothing short of the creative power of God. This is the truth that opens John’s Gospel. In the wonderfully poetic prologue we hear about the “Word” that was in the beginning with God, and more than that was God. So there’s something about words that puts us in touch with the holiness of God. John then goes on to suggest that we have been put in touch, literally, with that holy, creating Word. It was embodied in Jesus. This Word is a kind of conduit between us and God, between heaven and earth. Think about it, our words give shape and meaning to the world around us. They frame our emotions and parse the events of our lives as they play out from day to day. It isn’t just the other creatures of this earth that we are called to name, but every other aspect of our existence as well. The story we tell creates the way we approach our lives and what we do with them. Words, and speech in particular, have the power to amuse and persuade. Us use them to influence the emotions and incite the actions of others. It’s more than just the words themselves, it’s how they are spoken. The same words can be said by two different people with entirely different results. There is something unique about how a word is delivered. Have you ever had that happen? Have you ever said something that needed to said, but wished you’d said it differently, found a way to make your point without coming across as ridiculous, or angry, or judgmental? Eventually, we figure out that this super power that we have in our tongue, this power to name and communicate and create reality is a power as good as the one who gives it. But it certainly can be used for evil too. It can be used to serve lesser gods, the gods of comfort and leisure and financial security; used to create a reality shaped by our words and designed to serve our own interests.

In this respect, James warns, the tongue is less like a bridle or a ship’s rudder, and more like a fire that set an entire forest ablaze, or a deadly poison. As children we were taught the familiar rhyme, “sticks and stones may break my bones, but words will never hurt me.” We employed that phrase like armor, really, because we wanted to believe it was true; even as we felt the sting of the taunts and teasing that came our way. I am a little brother. I have never had my older brother’s strength. We’d get into fights or wrestling matches as kids, and I’d always lose. Always. Until one day I learned that punches and half-nelson holds weren’t the only way to hurt someone. I learned how to needle my brother, how to hone in on the one thing that was bugging him or the insecurity he tried to hide, and exploit it. The result was almost always some kind of physical retribution. But it didn’t hurt quite as much know that I’d been able to wound him first. Sticks and stones may break your bones, but broken bones can be healed. The wounds inflicted by our words are far more difficult to undo. “You’ll never amount to anything.” “You’re worthless” “Crying is for sissies” James is right. The tongue is powerful and its poison can be deadly. Our words, whether it’s the one we say to others, or the things we tell ourselves, can just as easily be used to hurt and destroy as they can to bless and create. It’s enough to leave anyone felling a little tongue-tied.

I remember that year-and-a-half year old baby on that Christmas drive to New Orleans, remember how much I wanted to talk to her and explain that I understood how restless she was in her car seat. I remember wishing she could just ell me what was wrong when she would fuss, or ball up her fists and scream. And I remember telling my dad how I couldn’t wait for her to talk. “The problem,” he said, “is that once they start talking, they never stop.” The truth is that the ability to speak doesn’t always translate into the ability to communicate. Where then do we go from here? What can we do in our tongue-tied state, capable at once of saying things that can alternately bless, or curse? I think the answer may be related to how James talks about the problem. If the tongue is our super power, then it is a power that comes to us from God. The same tongue that we use to praise God gets used to curse others- who also happen to be made and gifted in the image of that same God. This gift, like every gift that comes from God, isn’t for our exclusive benefit. And it isn’t give so that we can use it to tear others down in an effort to build ourselves up. Like every gift that comes from God, words are given for us to build, and plant, and create what is good, right alongside the One who speaks everything that is into being. We have a concrete opportunity to live into that on this Sunday when we will welcome two new children into the household of God through the waters of baptism. We are called to embody the words of promise that we will make as Christ’s body, “to guide and nurture… by word and deed, with love and prayer, encouraging one another to know and follow Christ as faithful members of his church.”

That is how the Kingdom of God comes. It comes when the gift of God’s Word takes up residence in our lives and becomes the conduit on heaven’s behalf for the good for those we are called to love here on earth.