Click here to view the full sermon for January 3, 2021, entitled "The True Light." 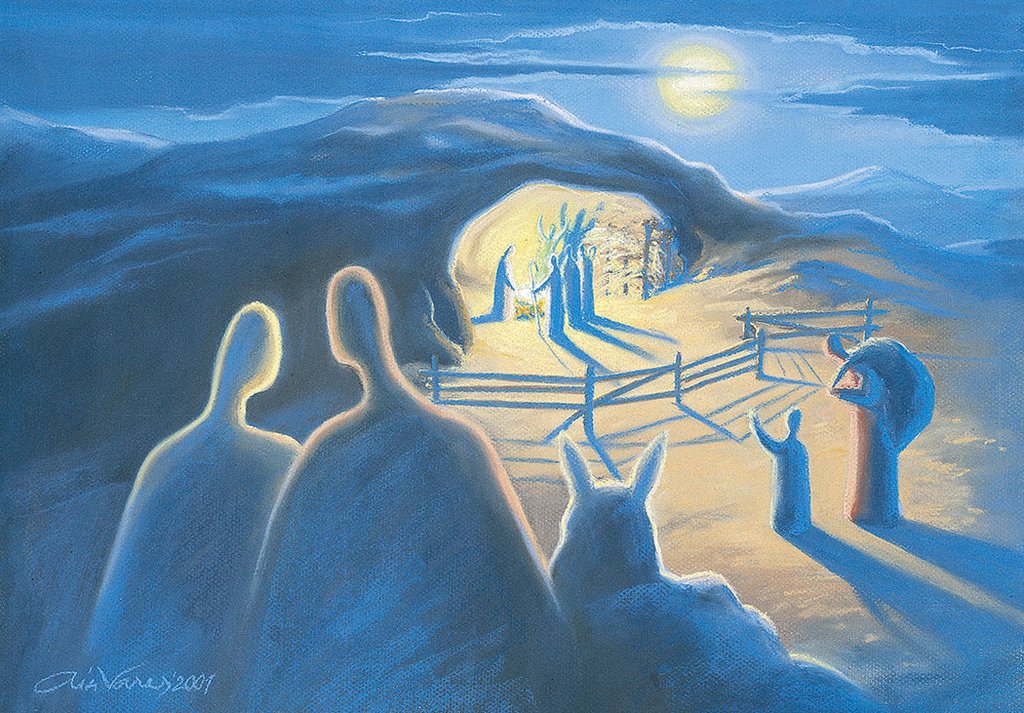 Our leaders are warning us that the darkest days of the pandemic are before us.  Already it feels dark enough with the hospitalizations and deaths, political discord and violence, floods and fires.  In the midst of this “bleak midwinter”, however, there are shafts of light, giving us hope. Especially these new vaccines that hopefully will bring this pandemic under control.

The light peeking through the clouds is due largely to two of the leading scientists working on these vaccines.  And both are women.  Dr. Kizzmekia Corbett is an African American woman with a Ph.D. in microbiology from the University of North Carolina.  The lead scientist on the Covid-19 vaccine at the National Institute of Health, her research led to the Moderna vaccine.

Dr. Katalin Kariko is a Hungarian trained biochemist who fled Communist rule in 1985 and began her work on RNA at Temple University in Philadelphia.  Her research led to the Pfizer vaccine and that may lead her to  the Nobel Prize.  These two women and their colleagues have been bright lights shining in our darkness.  For them and their colleagues we give thanks to God on this first Sunday of 2021.

Our Gospel reading is a hymn of thanksgiving to God for the Word made flesh.  Truly one of the great hymns of the early church, it moves from eternity to time, from creation to incarnation.  From the invisible God dwelling in light inaccessible to the light of the world shining in the face of Christ.  This hymn begins at the beginning and summons us to worship our Lord full of grace and truth.

Our hymn gives us a summary of the Gospel of John in two verses:

“He came to his own and his own people did not accept him. But to all who received him, who believed in his name, he gave power to become the children of God”(vv. 11-12).  The first verse summarizes the ministry of Jesus among his own people who often rejected him.  The second verse speaks of the faith of the children of God.  Those climatic moments reveal, for those who believe, the power of God’s love for all the world.

I truly love verse five, the best line in the hymn:  “The light shines in the darkness and the darkness did not overcome it”.  The second part of this verse can be translated “the darkness did not comprehend or grasp it, welcome or accept it, overtake or master it.”  In other words, the darkness sought to swallow up the light, like a black hole in space.  This idea is restated in slightly different form in verse nine:  “The true light, which enlightens everyone, was coming into the world.”  This true light is identified with life, and that “life is the light of all people.”

Life and light oppose death and darkness throughout the Gospel of John.  In chapter three we read, “The light has come into the world and people loved darkness rather than light because their deeds were evil.”  There is an undeniable mystery about evil-why it so opposes the true light that is life indeed. Why evil seeks to destroy the good-that remains an enigma to this day.  And yet the final verdict of the Gospel of John is this: life and light could not and would not be overcome even by opposition or crucifixion.  The light shines in the darkness even yet.

Clearly the writer of John’s Gospel has not only the ministry of Jesus in mind in these verses. He also has in mind the creation of the world.  His opening words echo Genesis 1:  “In the beginning was the Word and the Word was with God and the Word was God.”  God created the world with the Word, through the Word and for the Word.  And let us not forget the first Word of creation:  “Let there be light.  And God saw that the light was good and God separated the light from the darkness”.  And that is what God has been doing ever since-separating the light from the darkness.  It is a never-ending task.

So the Prologue to John is the celebration of light over darkness, life over death.  This true light offers “grace upon grace” to a world that is all too ruthless and indifferent. It holds up “grace and truth” in a world filled with lies and deception.  It lifts up witnesses to the truth like John the Baptist, even when all too often the likes of Herod and Pontius Pilate hold sway.    The Prologue calls us to join John the Baptist in witnessing to “the light of all people.”

If ever there were hopeful and encouraging words, it is this hymn.  What could be more astonishing than this claim: “The light shines in the darkness and the darkness did not overcome it”?  And so we believe that Jesus lives, despite what the darkness did to him.  Jesus is risen to reign even still as the light of the world.  He is risen, he is risen indeed, shining above the darkness. That is the heart of the Good News.

If we trust that promise, if we believe that word, everything changes.  Our attitude about the future changes.  Our fear of evil and suffering and even death changes.  Our anxiety about the condition of the world changes. A global pandemic is not the last word. Warfare is not the final word.  Nor is the conflict in your own family.  Because we believe this promise, we are of good cheer trusting that the light will be victorious. We offer our light to the world knowing its power-the light shines in the darkness and darkness cannot overcome it.

Many years ago I took a group of Texas A&M students on a mission trip to Christ in the Desert Monastery near Abiquiu.   Several of my students were aerospace engineering majors.  They had worked as NASA interns at the Johnson Space Center in Houston.  Their work was on satellites and their computer systems.  They loved satellites.  No, really!  They LOVED satellites!

After digging a fishpond at the monastery and worshipping with their community, we gathered outside to reflect upon our day.  It was extraordinarily dark, a moon-less night.  And then one of the students pointed to the west and said, “Look at that airplane…how fast it is going.”  Then I said, “That is not an airplane.  That is a satellite.”  My students literally cheered for joy.  They had never before seen a satellite in the skies.  These students were mainly from around Houston where the clouds and the city lights prevent you from even seeing the stars.  During that evening we in fact saw 18 satellites. Every time one flew over us the students just went crazy, pointing and shouting for joy!  “Look! Look!”

Then one of the aerospace engineering student said to me, “I have always known that the skies were filled with satellites.  I have worked on them with my hands. I have studied them closely.  I have tracked them across the sky on my computer screen.  But I have never seen one up above with my own eyes.   This just shows that there is always light above you, which you may not always see.  The light is there.  You just have to be in the right place to see it.”

Ever since that experience in Abiquiu I am reminded of those satellites high above us, circling the globe at amazing speeds.  At night if you are in the right place, you can see them.  But even if you can’t, those satellites are always there, bright and shining, speeding across the firmament.  Something like the light shining in the darkness.  The light is there, even when you can’t see it.  Though the clouds hide it, still the light shines.

“The light shines in the darkness and the darkness has not overcome it.”  This is the Good News, amazing news.  Thanks be to God.  Amen.