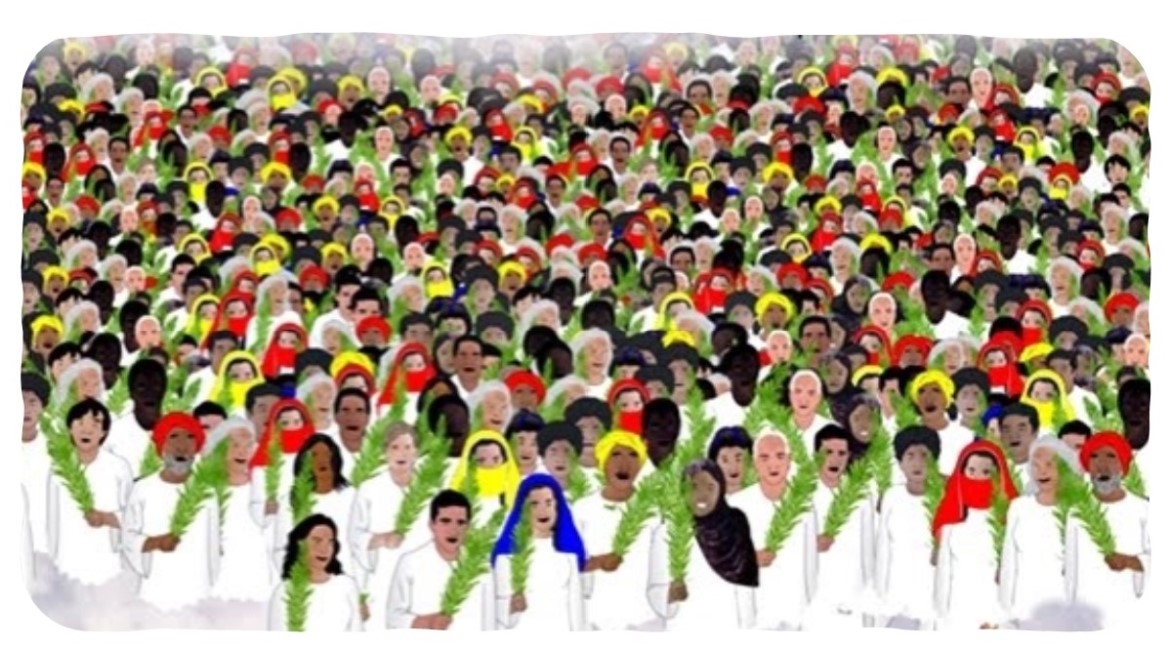 Halloween is over. With concern around rising COVID infections, really, it was over before it could begin. Still, Halloween is over, and yet our text this morning is from the Revelation to John of Patmos. To most people this Revelation is something a little better suited to the frightening shadows of All Hallows Eve than it is to our Sunday proclamation of All Saints. After all, this is the book that has fueled many a horror movie filled with omens about the Anti-Christ, creepy end-time scenarios, and foreboding warnings about being left behind. John’s Revelation gives us some of the bible’s most grotesque imagery of dragons, beasts, sword- tongued saviors and a lake of fire. It’s one of those biblical books that few believers feel lukewarm about, they either dive in with a fervor that borders on fanaticism, or they do all they can to avoid this final witness in their Bible like the locked room in a spooky attic. So enthusiastic are the fans of Revelation that they frequently and unwittingly multiply its title and refer to it in the plural, ‘Revelations’, while the scaredy cats wish there wasn’t even a single one to begin with. And they’re in some pretty good company.

The book of Revelation is one of only two books in the entire Bible for which reformer John Calvin did not write a commentary. Its shocking subject matter has frequently vexed church leaders through the centuries who have found it at best difficult to teach and at worst theologically offensive. You certainly don’t hear it preached much from Presbyterian pulpits. That’s too bad; because by ceding the field we have allowed for a woeful misuse of this vision of God’s eternity among the general populace. It is past time to rescue our reading of Revelation from All Hallows Eve and let it sing to us the full-throated exaltation of God that it proclaims. It is time to hear and read this Revelation for what it is- not an encrypted code book for future historic events involving the United Nations or Hollywood celebrities, various rogue leaders improbably linked to the numerological identifier 666, and a host of otherworldly events- but as a glimpse into God’s eternity, a vision of how God will fulfill God’s promise to the church and all creation by redeeming both from the corruption and violence that threaten and surround them.  The vision revealed to John by that angel on the small Greek island of Patmos, is one of hope imbued by the Spirit of endless worship.

When the curtain rises on this apocalypse- this lifting of the veil to show us God’s ultimate reality- John tells his audience, “Blessed is the one who reads the words of this prophecy, and blessed are those who hear it, and take to heart what is written in it, because the time is near.” When it comes to the vision that unfolds the time for those who hear it is always near, whether they are the church of the late 1st century, the church of the Middle Ages, or the Reformation, or even the emerging church in the age after Christendom. The time John is speaking about is not a chronological date, a few flips of the calendar page away, next Tuesday at 6:45 Greenwich Mean Time. No, John is speaking of kairos, time not as the clock keeps it but time as it is kept by God.

When John tells us that the time is near, he is echoing what Jesus had to say about the kingdom of heaven when he first began teaching in the hills of Galilee. The time of Revelation is near, because the kingdom itself is near. And what we glimpse is nothing short of heaven itself, the nearness of God’s time and eternity that is always breaking into our reality.

The town where we lived in Tennessee was like so many small towns you encounter across the bible belt of the South. Much of the talk you heard in religious circles was about whether you had accepted Jesus Christ as your personal savior. A young woman who accompanied the church youth on their mission trip one summer had a minor panic attack in the van when she momentarily forgot the date on which she had made her confession and been “saved”. If the trends are any indication, many of the young people who make such confessions will have ample opportunity to drift in the cultural current away from their public professions of faith. Eventually their decision to get married may bring them back to the church, either their own or their future spouse’s. Decades after the fact they might find themselves wondering if they really were ‘saved’, if their confession actually counted. Maybe it had been invalidated by their wandering, or maybe the wandering meant that they hadn’t really done it right in the first place.

As a young person it all sounds so simple, but now all the bible study, all the discussions with pastors and friends only confuses the issue.  “What if I die tomorrow?” they end up asking, “Will I be saved and go to heaven?”  Through all the consternation and soul searching something gets lost, and that something is God. The lonely battle to understand the state of one’s own soul becomes a solitary attempt to decide, to feel, to be certain. But it has very little to do with God.

You see the primary question of faith is not, “Will I go to heaven when I die?”  The primary question of faith is, “What is it that God wants?”  As former United Methodist bishop Wil Willimon puts it, “the first thing we must say is that whatever words like ‘heaven’ or ‘salvation’ mean, they first mean something about God, and what it’s like to be near God.”  That is the song of the multitude, the saints beyond counting from every nation, all tribes, people and languages who stand before the throne of God, “Salvation belongs to God, who is seated on the throne, and to the Lamb.”  To speak of salvation is to speak counter-culturally because in this day and age it is all about our initiative, our actions, our desires. But the song of eternity is a song sung by the saints of God who have learned firsthand that salvation cannot be the exclusive proprietary claim of any one person, or group of persons. Salvation belongs to God.

And so, the first step in understanding what it means to be a saint, the best way of discovering what it is that God wants and what it’s like to find ourselves near to God is to stop trying to save ourselves. It can’t be done. Believe me it has been tried and tried, and it is rarely pretty because all attempts at saving ourselves are focused entirely inward; self-help, self-awareness, self-esteem. The main reason why Benjamin Franklin was wrong, why God does NOT help those who help themselves is that God’s vision of redemption is SO MUCH bigger than that.

Take a look again at the crowd before the throne. We’re talking about a multitude beyond counting.  No, God helps, period. End of sentence. Salvation belongs to God who sits upon the throne that rules over all creation. God so loved the WORLD, that he gave his only Son. God sent the Son into the WORLD that the whole WORLD might be saved through him.

Now as spectacular as this scene is, with saints beyond number singing in worship before God, this isn’t some pie-in-the-sky picture that John paints for us.  This is not some mindless thrall, some kind of Jonestown sea of shiny happy Kool-Aid drinkers. Who are these people massed before the throne of heaven? We’re told they’ve been through the great ordeal. They have known hunger and scorching heat. They have been through the pain and disappointment of a world where things are not yet what they should be, a contentious and often dangerous world where pandemics rage and militias plot to kidnap leaders. Sound familiar?  In short, they are people not all that different from you and me; people who are gathered before the throne not because of their own blood, sweat, and tears, but in spite of them. They are gathered because someone else’s blood, God’s sacrifice of God’s own self, God’s own son, has served notice that the contentious and dangerous powers of this world do not get the last word.

They are gathered, WE are gathered, because the salvation that doesn’t come from us is nevertheless for us. It is what makes this scene, what make all worship possible. You see this is our story, this fantastic scene before the throne. The time is indeed near, and if we will pull back the curtain with John, we will see that it is already here.

All Saints isn’t merely a recognition and remembrance of the dead who have taken their place at that throne, it is a reminder of who we are as well as we are gathered even in this digital format to worship and sing God’s praise. It isn’t what we do that makes us saints. We are made saints by what God has done, by what God wants.

What John shows us is a picture of ourselves at worship, rightly focused not upon our individual salvation but upon the Lamb at the center of time and eternity.  It is a picture of a people who worship amidst an often violent and dangerous world, but who worship nonetheless because like those who have gone before us we have glimpsed the time that is near. It is God’s time, God’s reality where the power of love is always stronger than the power of evil, where life has overcome death and there is more than enough room for a multitude beyond number. And as we worship we see the truth of which we sing, that God’s reality becomes our reality. That in the end, God gets what God wants.  Alleluia, amen.