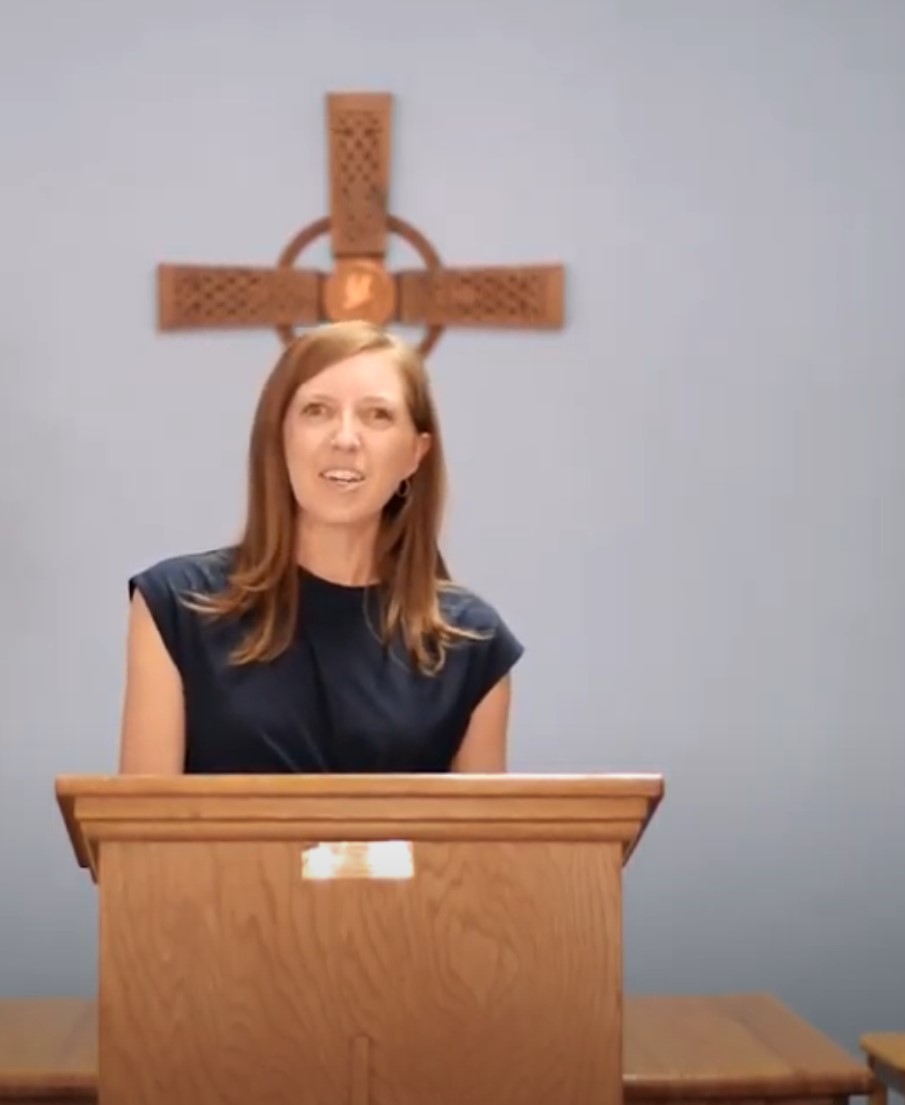 Three weeks ago Frank preached from chapter one of 1 Peter and he reminded us of the context in which this letter was written. Christians in the early church suffered persecution under Roman authorities, and the Christians, in this letter specifically, have been scattered and dispersed across the region – living as strangers and exiles in foreign land.

The author of this letter writes in order to give these people hope, to help them reconstruct their identity in a new situation after having lost so much of what was familiar and settled. He writes to help them rebuild the shattered ruins of their now scattered and isolated community in the light of Christ’s resurrection.

It’s important that we read this letter with the understanding that as American Christians, we do not find ourselves in any kind of similar experience of persecution because of our faith. However, in the moment we find ourselves in, the words of hope offered here speak to our situation where so much of what we have known has been upended. In some ways, it feels a bit like we’re exiles in a strange land, navigating a new, challenging reality, trying to figure out exactly how our identity and way of life is being reshaped.

As we reach chapter 2 of this letter, the author takes us on a journey, weaving together reference after reference from all across the Hebrew Scriptures, taking old words and old promises and piecing them together to speak hope into a new situation while also rooting us in the unchanging promises of God.

2 Like newborn infants, long for the pure, spiritual milk, so that by it you may grow into salvation— 3 if indeed you have tasted that the Lord is good.

4 Come to him, a living stone, though rejected by mortals yet chosen and precious in God’s sight, and 5 like living stones, let yourselves be built into a spiritual house, to be a holy priesthood, to offer spiritual sacrifices acceptable to God through Jesus Christ. 6 For it stands in scripture:

“See, I am laying in Zion a stone,
a cornerstone chosen and precious;
and whoever believes in him will not be put to shame.”

7 To you then who believe, he is precious; but for those who do not believe,

“The stone that the builders rejected
has become the very head of the corner,”

They stumble because they disobey the word, as they were destined to do.

9 But you are a chosen race, a royal priesthood, a holy nation, God’s own people, in order that you may proclaim the mighty acts of him who called you out of darkness into his marvelous light.

Of all the rich imagery packed into this passage, the image I want to play with this morning is the author’s use of rocks.

In our Confirmation class this year, for some strange reason we kept noticing references to rocks in Scripture, it become a fun game we played together – calling out any references we found as we read Scripture.

One student asked if I could tell the whole story of the Bible with just stories about rocks, and I said I thought it sounded like a fun thing to try.

And so, I was excited when I read our passage for this week -- full of images of living stones, cornerstones, and stumbling stones. I wish our Confirmation class were here with me to help offer some reflections!

In Aristotle’s great chain of being, he classified rocks as the lowest form of life because they aren’t living – they can’t move, reproduce, or think rational thoughts.

I think rocks are storytellers.

If you’ve ever been to Ghost Ranch and taken in the beauty of Kitchen Mesa, you’ve looked at a geologic history going back 130 million years, stories as old as time etched into layers of colors on the sides of the sheer red cliffs. Those rocks tell a story about creation, a story that began long before our ancestors ever stepped foot on this planet.

And rocks have a story to tell in Scripture too.

The Psalmist and the prophets regularly call out to God our Rock, invoking God’s dependability, stability, and protection.

Stone is the very material the ten commandments are written on.

It’s from a rock that Moses extracts life-giving water in the middle of the desert. It’s at the same rock that his faith is tested.

Rocks are the materials used to build altars throughout the story of God’s people. Stone altars marked important places and encounters,

like when God promised Abraham descendants that would outnumber the stars. And when Jacob had a dream at Bethel of angels ascending and descending a ladder.

A stone marked the spot where God’s people had been surprised and changed by the presence of God.

When Joshua led the people across the Jordan River into the Promised Land, they took 12 stones from the middle of the dried up riverbed to set up as signs for generations to come, so that when their children asked what the stones mean, they could tell the story of their rescue from Egypt and their entrance to the Promised Land.

Later on at the end of Joshua, all the tribes gathered to renew the covenant, and when they arrive at the part where ancient near eastern custom would have them list witnesses to this covenant, instead of naming a human witness, the witness that Joshua invokes is a large stone.

And so it seems, within the world of Scripture, among other things, rocks function as witnesses.

They are witnesses to encounters with God,

and witnesses to the promises we make to God.

Set up as dependable, long-lasting reminders, rocks are used as markers of key moments and enduring holders of the stories that shape us and inform how we should live in the world.

After this quick tour of rocks in the Old Testament to color in our imaginations a little, we now return to our passage from 1 Peter, where we find Jesus referred to as the living stone, the cornerstone, and the stone rejected by builders.

The original recipients of this letter would have recognized the reference here to the prophet Isaiah’s use of the cornerstone image, and to their recently destroyed temple in Jerusalem. The cornerstone was the foundation stone - the first stone laid, the stone that orients all the other stones. The stone that is still there even as the others have crumbled. The stone that still stands despite the unfaithfulness of God’s people – continually witnessing to the steadfastness of God’s patient love.

The original recipients of this letter would also resonate with Jesus – the stone rejected by builders- as they themselves suffered intense persecution and rejection from the world around them.

But what the author of 1 Peter does that I find the most interesting, is he not only refers to Jesus as the living stone, but he extends this metaphor to include all of us as well!

“like living stones, let yourselves be built into a spiritual house”

These words would have been heard as exceptionally hopeful news to oppressed exiles scattered around first century Asia Minor. Scattered in exile, there was no safe common place for the full community to gather, so to understand themselves as living stones being built into a spiritual house together was an idea that could give shape to a new kind of community. Just when they worried they might be good as dead, here are words of growth and new life.

I wonder if we hear this passage with new ears this morning… Unable to gather in our usual spaces, we are reminded in these days that the church is not the building, but is the community at worship. The church is not built of physical stones, but of living ones. Scattered, but gathered in spirit.

And like the purpose of other stones throughout Scripture, the purpose in our being built together is in order that we might serve as witnesses, that we might proclaim the mighty acts of the one who called us out of darkness and into God’s marvelous light.

Like the stone altars that marked a life-changing encounter with God;

like the stones from the river Jordan that proclaimed the story of liberation to generations to come;

As living stones, our lives are meant to bear witness and proclaim the ways God has called us out of darkness and into the light.

We are chosen by God, we are built by God – not into a wall to keep people out, but into a spiritual house to invite them in.

All of this is hard. And at times overwhelming. It would be strange if you didn’t feel any anxiety about the uncertainty of the moment we’re in.

But this morning, don’t miss the good news proclaimed in 1Peter. Our risen Lord is the cornerstone of the house we’re being built into. And not even a pandemic can stop that.

One of my facebook memories came up in my newsfeed yesterday, and it was of a picture I took a couple years back when I made a daytrip to Oxford. The picture is of a sign in a very old church that simply reads “a church has stood on this site for over 1000 years. Over that time there have been many changes.” It might be the most unnecessary sign I’ve ever seen because of how obvious this statement is. But in its humorous simplicity, It gives me hope to remember that through the ages there have been so many changes to the ways that we gather and how we worship. And through it all, the promises of God, our rock and our redeemer, have not changed.

As we come to the living stone, as we approach our risen Lord who knows the way out of a grave, may we find firm ground as we allow the spirit to build us into a spiritual house that will certainly look different than anything we’ve known before.

May we have patience, grace, and lots of imagination as we are led into this unknown future with a known God who walks with us each step of the way.