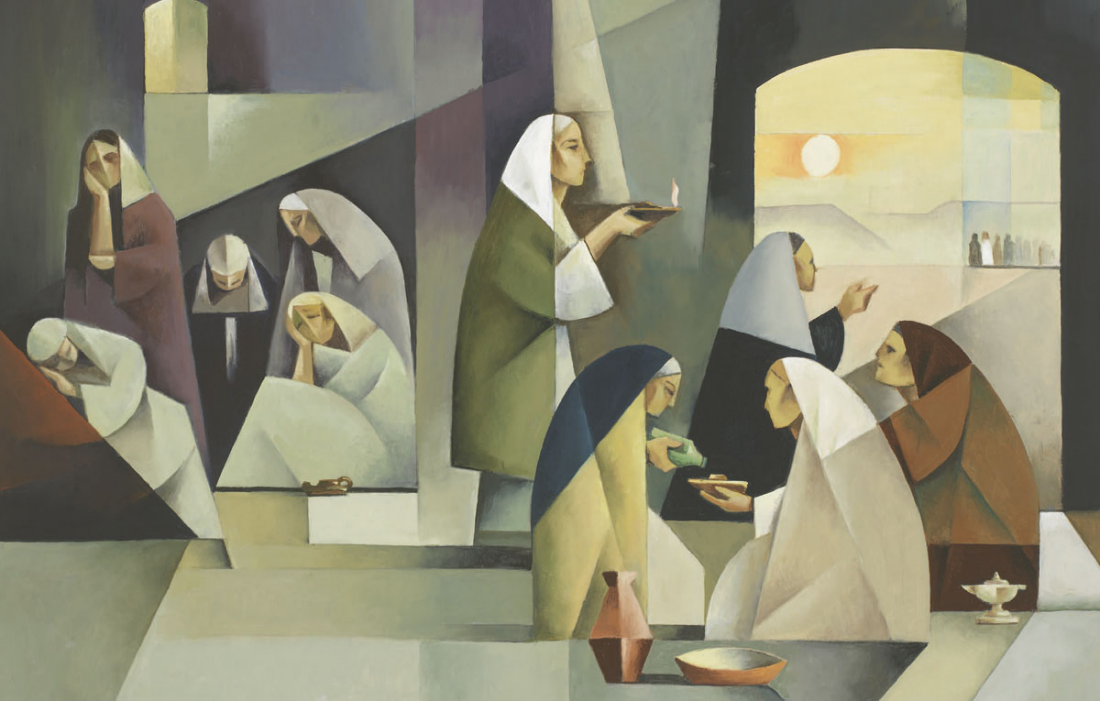 The difficulty with weeks like this in our new, and hopefully temporary, reality is that sermons get written and recorded days before they become a part of worship. Depending on your perspective that can be either a good thing, or a bad thing. Good in the sense that the Word of God is timeless and need not be dependent on the events of the world to speak its truth to us, but bad in the sense that when the Word became flesh is was to dwell among us, that is to speak to us and know us and meet us where we are in all the messy, divided uncertainty of our lives. The old saw about preaching with the bible in one hand and the newspaper in the other means that as timeless as God’s Word may be, the seed of that word finds purchase in the soil of our lives and the events that shape them. This is my long way of saying that as of this recording we do not yet have a clear result from this past week’s Presidential election. By the time these words find their way to our worship, a clearer result will no doubt be known, although it sounds like the matter may be far from settled. As it turns out, this combination of expectation, waiting and delay and the wisdom needed to get through it are all on order for us this morning in the parable that Jesus offers, from the 25th chapter of Matthew’s gospel, the first twelve verses. Listen, for God’s Word to you at this moment…

‘Then the kingdom of heaven will be like this. Ten bridesmaids took their lamps and went to meet the bridegroom. 2Five of them were foolish, and five were wise. 3When the foolish took their lamps, they took no oil with them; 4but the wise took flasks of oil with their lamps. 5As the bridegroom was delayed, all of them became drowsy and slept. 6But at midnight there was a shout, “Look! Here is the bridegroom! Come out to meet him.” 7Then all those bridesmaids got up and trimmed their lamps. 8The foolish said to the wise, “Give us some of your oil, for our lamps are going out.” 9But the wise replied, “No! there will not be enough for you and for us; you had better go to the dealers and buy some for yourselves.” 10And while they went to buy it, the bridegroom came, and those who were ready went with him into the wedding banquet; and the door was shut. 11Later the other bridesmaids came also, saying, “Lord, lord, open to us.” 12But he replied, “Truly I tell you, I do not know you.” 13Keep awake therefore, for you know neither the day nor the hour.

It helps to have this in mind as we approach the story Jesus wants us to hear, because while it has something to say to us about wisdom and folly and the judgment that distinguishes one from the other, it may not say it in the way we have been trained to think about such things. Here’s the setup, a wedding is imminent and bridesmaids have been selected to await the arrival of the bridegroom and accompany him to the wedding feast. From the outset Jesus lets us know that five of the ten are foolish and the other five are wise. But the reason he gives for characterizing them in this way sounds a little off. All ten have lamps that will be lit as they accompany the bridegroom into the party. Jesus says the foolish five bring no oil for their lamp, while the wise bring flasks of oil. By most standards, it sounds like Jesus might have his categories mixed up. Now, I know that first-century middle eastern wedding practices bear little resemblance to the kinds of weddings that we’re used to. Still, I have a hard time imaging bridesmaids toting around flasks of oil with them. Even if bridesmaids’ dresses came with pockets that would be an awfully bulky and inconvenient accessory. I’ve known a few groomsmen that I suspect might have been carrying flasks of something other than oil, but I digress. It’s the bridesmaids with the good sense to rely on the oil they’ve got in their lamps already who sound wise to me. After all, why carry around something that you surely won’t need. The day of the wedding you go out to meet the bridegroom. When he shows up, you light your lamp. Keep it simple. What’s the worst that could happen?

The wrinkle, of course, comes when the bridegroom is delayed. Who knows why? Heavy traffic on the road? Problems with his horse or donkey? Rooster failed to crow and he got a late start? It’s worth asking because if this bridegroom had shown up on time, we wouldn’t even be talking about the folly of these poor young women. I have to say that it sounds more than a little sexist to tell a story where the blame for being left out in the dark falls on the women when it was the man who created the problem in the first place by coming so late. I mean, honestly, who shows up for their own wedding at midnight? Given that we don’t know the reason for the delay it really isn’t so much a problem as it is the circumstance. The writer Seth Godin points out that a problem without a solution isn’t really a problem so much as it is a condition. Which is where the lamps and the oil come in.

As these bridesmaids waited and waited it became dark. No one wants to wait in the dark, so they lit their lamps against the darkness. And still they waited, until all of them- the foolish and the wise alike- fell asleep. Then comes the shout, he’s here. The bridesmaids go to trim their lamps only to discover that they’ve burned through what oil they had waiting for the bridegroom. And this is a problem, because the fairly obvious solution to running out of oil is to have extra on hand. Which brings us to the troubling exchange at the heart of our story. Because when the foolish ask the wise to share what they have, the wise say, “no, there won’t be enough, you better go and buy some for yourself.” It’s like they weren’t even there for the feeding of the multitude. And what is Jesus even saying? Isn’t he the one who, when his disciples suggested that the hungry crowed go get themselves dinner, told them to give the crowd what they had. What gives here? Isn’t there always enough? What’s worse is that the fools listen to their friends, and while they’re out trying to find an oil dealer who’s open at midnight, miss the bridegroom’s arrival. Even worse than that, because they weren’t around to meet him when he finally arrived, by the time they do make it to the wedding fashionably late themselves, he says he doesn’t know them, and they’re shut out.

That doesn’t sound like good news. That doesn’t sound like the kind of happy ending that we prefer. What are we to make of all this? Because as someone who feels chronically unprepared, it all sounds a little ominous to me. The clue to what Jesus is getting at might come at the very beginning of the story, because this isn’t the first time he’s contrasted foolishness and wisdom in this way. The earliest sayings of Jesus that Matthew records come in what it commonly referred to as the Sermon on the Mount. It begins with the beatitudes, or blessings, that open the fifth chapter of Matthew’s gospel and concludes in the seventh chapter with Jesus saying this:

I wonder if the extra oil in the flask isn’t a little like the rock on which a house is built. It’s less a question of whether there is enough, and more a question of intention, of taking to heart what it is we are waiting for and doing so actively instead of passively. Relying solely on what we have- our wits, our intuition, our plans and expectations and affiliations- is more than a little foolish. Because all of those things shift like the sand and building our lives upon them is an invitation to collapse. All of those things can easily run out, or collapse when the unexpected happens, when a storm comes up, when the promise is delayed. And here’s the thing- the unexpected is always happening. Viruses cause havoc, pollsters get it wrong, relationships fail, treatments stop working, economies falter, addicts relapse. The judgement that determines whether we are able to navigate the dark and enter the feast of God’s power and presence comes down to a question of who we trust, whose judgement we trust: our own, or God’s. Trusting in our own resources and whatever we can find in the dark leaves us no time to become acquainted with the one who would save us from that darkness. Trust like that isn’t something we can share with one another, but it is the very thing that can keep our lamps burning when things don’t go as planned, so that they light up the darkness and eventually the way to the wedding feast where heaven and earth become one.