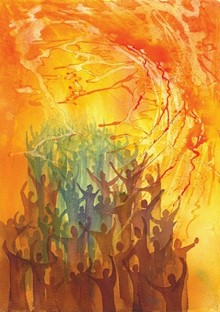 So, what did you get for Christmas this year? I know, the season of Christmas is long over now, and most people have boxed up the decorations for the year and moved on. In fact, this three-day weekend comes with its own holiday as we celebrate the life and legacy of the Rev. Dr. Martin Luther King and his work toward civil rights in this country. Still, what did you get for Christmas? When I was a kid, this was the #1 question as we returned to school in January. But it was a little fraught, because chances were good some kid would say that they got something that sounded so much better than what I got. Worse was when they said they got it from Santa, because you inevitably conclude that you weren’t nearly as good as you might have thought you were if Santa brought Scott Johnson that Star Wars death star, and all you got was a land speeder, or something. And if you knew Scott, you started wondering, is this whole Santa thing rigged because I know Scott and I’ve got to be at least as good as he is. Suddenly you can find yourself souring on your gifts to the point where they hardly even feel like gifts at all. I got a land speeder. I guess it’s okay.

If Paul’s letter to the church in Corinth is any indication, it would appear that this tendency to rank and compare gifts has always been with us, in one form or another. Now, Paul has spent a good part of his letter up to this point systematically addressing the many issues that were dividing the community of Christians in Corinth. It would appear that this is also something that has always been with us, the divisions that arise over time, even between people who ostensibly belong to the same community. We like to cast many of the differences that divide us these days from cultural issues to religious issues, to political issues as the product of opposing sides and ideological bubbles. But it’s just as true that within those sub-cultures there is plenty of infighting as well, and Corinth was no different. At the heart of many such conflicts is the question of identity. Who are we? What are we going to be? And the question of identity points to an even thornier one, who belongs? That is, who is with us, and who is not? Who is in, and who is out? There is plenty that can be said about the values and actions of any particular group. Sometimes if those values and actions run contrary to what we ourselves value and strive to do, it can be hard to understand why anyone would want to belong to such a group. The answer, of course, is that it gives those in the group a sense of belonging. Regardless of what we might think, many groups and sub-cultures exist because they give people who think alike the sense that they are not alone.

The divisions in Corinth appear to be many, starting with who was baptized by whom, continuing with the married and the unmarried, whether to eat food that’s been sacrificed to Roman gods, who is covering their head, even turning the practice of communion into a battle of the haves and have-nots. Finally, Paul gets around to the discussion we have before us this morning about so-called spiritual gifts. Although, initially, that is not how he introduces this section. The Greek word for gift is fairly specific, and that’s not how Paul opens. He opens more literally by addressing spiritual matters, or what today might be called “spirituality.” Nowadays that can be a pretty loose term. For the past couple of decades it’s been popular for many people to claim that they are, “spiritual, but not religious.” What I’ve found that often means is that such folk haven’t given up on God, or a sense of the divine other, a power greater than themselves. What they’ve given up on is the religious forms of expressing that belief. Forms that end up policing personal behavior, or upholding a narrow dogma that becomes abusive, threatening people with damnation or excommunication if they fail to toe the religious party line. It can get a little frustrating to those of us in religious communities who try to avoid that stereotype. Still, the criticism is not without merit. In a way it’s not all that different from what Paul was trying to address in this fledgling Christian community. There were clearly people within the community who thought their manifestation of the Spirit, their spirituality, if you will, made them better or more holy than the rest. Just like it can be tempting for those of us in religious communities to sneer at those who say they are spiritual, but not religious. We might think our penchant for church and Sunday worship is an expression of the Spirit that is somehow greater than those who stay away. But the truth is, says Paul, that there are a variety of gifts. Just as there are a variety of ways to serve. And there are a variety of ways of activism. They don’t have to look alike. They don’t have to serve alike. They don’t even have to advocate for all of the same things to be a singular expression of the one Holy Spirit who is the catalyst for them all, the active agent by which they are made manifest in the world.  There’s already far too much division in the world to be divided over those things by which God’s active presence in the world is made known.

Instead of finding our belonging based on those who think like us, look like us, do things the way we do them, pray the way we pray, support the causes we support; instead of forming our identity according to all those categories that cause us to look at those outside them with disdain and disbelief, the invitation of faith is to trust that difference and variety are not a threat- they are the point. Our belonging comes from the Holy Spirit as it is made manifest uniquely in us and in a completely different way in someone else. As long as we view difference in others as a bad thing, or something to be feared and kept at a distance, we risk cutting ourselves off from the way the Spirit may be at work in and through us. Conversely, if we think there’s only one right way to be spiritual and that way belongs to someone else; someone who preaches, or prays, or teaches, or serves, or advocates better than we ever could, in ways we cannot, we might end up like the kid on the playground who starts to doubt whether his gift is any gift at all. Listen, there is only one criterion that Paul lists for a manifestation of the Holy Spirit. It doesn’t have to go by any one name or adhere to any single sub-culture. It isn’t required to be vetted by a committee or undergo a physical. It doesn’t have to go through a background check first. The only thing any of us need to know to determine how God has gifted us with a manifestation of the Spirit is this; what does it do for others? That is, how does it serve the common good? That’s it. If you can speak in tongues that no one can understand? Probably not the manifestation that you think it is. If a person’s spirituality is really just their own thing that they do on their own? Probably not a manifestation of the Holy Spirit. If a person’s religion is a private thing that they like to keep to themselves? Again, probably not born of the one Spirit.

The whole point that Paul will go on to make is that each person’s gift- and yes, each and every person that is here and those who are not here have been given a manifestation of the Spirit- each person’s gift is a piece that fits into a larger whole, that serves a purpose that cannot be reduced to their individual benefit- what they get out of it, or what’s in it for them- but serves something larger than themselves. Individual rights mean nothing if they aren’t extended for the good of all. Individual liberty is meaningless if what we do with it isn’t in service to the greater good. That is the true gift of the Spirit, the best form of spirituality. It’s like those magnificent Byzantine mosaics you find in churches and mosques. They’re composed of tens, if not hundreds of thousands of broken pieces, all different shapes and sizes, no two exactly alike in color or texture. Individually these pieces are unremarkable. But taken together, placed by the hand of a master crafter, they come together to form some of the most breathtaking and remarkable expressions of beauty in the world. And the picture is not complete without each and every one of them, just as we are not complete until we welcome every other person we meet as part and party to the work of the Spirit in and through us all. As Dr. King put it in his work for greater justice, “We are caught in an inescapable network of mutuality, tied in a single garment of destiny.” That garment is the Holy Spirit that binds us to one another, and that destiny is nothing less that the realm of God’s present power and love to take us in all of our glorious variety and make us one.