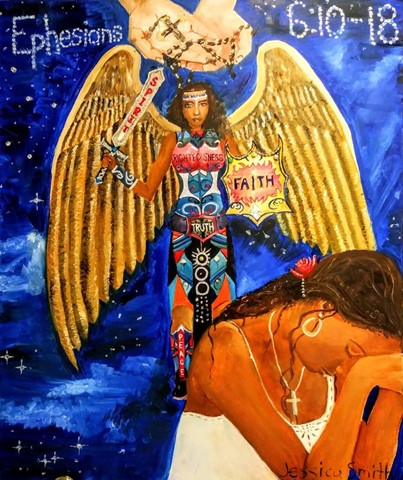 Last week, I was talking with some friends when one of us confessed that he was having a hard time with everything that we going on in the world. The Delta variant of COVID is wreaking havoc across the country, sending unvaccinated children and young adults to the hospital and even to their death. Meanwhile the news is full of images from the Kabul airport in Afghanistan where thousands of Afghans are trying to get out of a country now controlled by the fundamentalist Islamic group, The Taliban. And it was only a week ago that the United Nations received a briefing from the world’s top climate scientists and the accelerating warming of the planet and the role human activity has had in creating the situation and the role they will have to play if they want to begin to reverse it before the worst comes to pass. It was all too much for him, but as he said it, one by one, we all agreed that we were feeling the some stirrings of overload and despair from it all. It is human habit when we’re feeling like that,- when circumstances are dire and we are overwhelmed by all the uncomfortable emotions that arise in us- it is our habit to assign blame, to identify who is responsible for all these terrible things. It’s easy to blame the resurgence of COVID on the people who refuse to be vaccinated, even though they are eligible. We might even be inclined to make some uncharitable judgments about their inaction in the face of such a significant public health threat. From the news coverage it would seem there is no end of who can be blamed for what’s taking place in Afghanistan, from decades of United States leadership to the Afghan people themselves. A planet that hosts 7 billion humans has even more possibilities for people to blame. That might make us feel better. Particularly if the finger we point is away from ourselves. But as our scripture reminds us this morning, whoever it is that we think is the enemy, whoever we seek to identify as creating and contributing to the problems that fill us with despair, conveniently deflects attention from the real culprits and lets them off the hook. Our struggle, we are told, is not with flesh and blood. That is, our struggle is not with the neighbor who doesn’t want to be vaccinated, or with the people who ordered and ended our presence in Afghanistan, or the Afghan security forces that made no effort to hold back the Taliban, or even the men who make up the Taliban itself. Just as our struggle isn’t with all the people who consume, produce and profit from the burning of fossil fuels that superheat our climate. The old Pogo comic famously declared, “we have met the enemy and he is us.” But that isn’t entirely so, says this letter to the church. And the truth is that we do far more harm than good by treating one another as enemies- for whatever reason. That may be why Jesus taught his disciples to love their enemies and pray for those who persecuted them. When we conclude that someone else is the enemy, we only contribute to the growing enmity of our world. No, the real struggle, according to this letter is the rule and authority of cosmic powers, spiritual forces of evil.

That sounds a little fantastic doesn’t it? One of my favorite TV shows at the turn of this century was the supernatural teen drama Buffy the Vampire Slayer. It was ostensibly a show about a young woman in high school and her friends. But as the opening lines of the show explained, “In every generation there is a chosen one. She alone will stand against the vampires the demons and the forces of darkness. She is the slayer.” Each week Buffy and her gang would face off against a different supernatural evil force. But what the show was really about was portraying how scary high school could be. The finale of the third season was a particularly harrowing encounter with a giant snake at their graduation. When the heroes prevail one of them remarks, “Guys, take a moment to deal with this: we survived.” “It was a hell of a battle,” says Buffy. “Not the battle,” her friend replies, “high school.” If we’re too busy being enlightened by the idea that demons with horns and pointy tails don’t exist, we might fool ourselves into thinking the demonic isn’t real either. And nothing could be further from the truth.

The falsehoods and misinformation circulating and being promoted that keep people from receiving the COVID vaccine are absolutely real. They are doing incalculable harm. Healthcare workers in San Antonio, Texas have been cursed, screamed at, and threatened with bodily harm amidst the recent surge. That is evil. That is the enemy, not the people possessed by it. The danger posed to the women of Afghanistan by a religiously driven sexism that previously held them captive in their homes and sought to make them invisible is absolutely evil. It has resulted in horrific acts of violent abuse. That is the enemy. These spiritual forces of evil are often systemically entrenched in laws and culture, rulers and authorities. That is what we are called to struggle against.  Forces like racism, sexism, classism and unbridled consumption. Forces that would have us see the immigrant as less than human, and the other as somehow monstrous. Powers that promote forms of Nationalism that pit neighbor against neighbor and cast suspicion on any who would challenge the story of national exceptionalism. It’s easy to see how we might fall into despair under this kind of spiritual onslaught.

Our translation says, “be strong in the Lord,” but the form of the Greek might be better rendered, “be strengthened by the Lord.” Telling someone to be strong in the face of all that is upon us in the world almost feels cruel. Who has the strength to withstand it all? No one. The strength it takes must come from outside our own limited resources. It is the understanding articulated in the second of the twelve steps used in recovery, that a power greater than ourselves can restore us. Or in the case of this letter, that a power greater than ourselves can strengthen us to stand against the cosmic powers of our present darkness. And the strength that comes to do so, the strength it takes to stand against all that would set us against one another and threatens to undo us is articulated in the imagery of armor; the whole armor of God.

The militant nature of such an image can be off-putting. After all, some of the most shameful chapters of Christian history, like the crusades and the inquisition, have come in the form of a militant faith executing untold horrors on people in the name of God. However, the armor described in this letter is almost uniformly defensive. We are not strengthened by God to wage war on others. In fact, quite the opposite. We are specifically instructed to wear shoes that make us ready to proclaim the gospel of peace, good news meant to bring people together not drive them apart. No, God equips us to stand strong. To be girded by what is true against the tide of misinformation, obfuscation, and deceptive practices that assail us every day. God gives us a breastplate of righteousness to protect our hearts against the injustices of this world, the places where things are decidedly not as they should be, where children go hungry and opportunity is denied in favor of a status quo that favors some over others. It is our faith, our trust in what God has done and has yet to do that that will quench the flaming arrows of distrust and suspicion that continually cast doubt and call into question anything and everything so that nothing and no one can be trusted. Faith is our shield against the kind of excessive skepticism and cynicism that would otherwise erode our confidence in that to which we have given our hearts. Likewise, the helmet of salvation protects our heads, saving us from unkind thoughts and judgmental conclusions. We are saved from a world that is defined strictly by our own thoughts and saved for the realm of God’s gracious and merciful love. And finally there is the sword of the Spirit which is the word of God. Friends who grew up in certain Christian traditions might remember doing bible sword drills, where they trained to use verses of scripture as a weapon. That might be missing the point of this particular piece of equipment. It is less about the words, and more about the creating word of God that parries all the destructive words that do so much harm. The Spirit deflects words of derision and abuse with God’s word that calls us into being and builds us up, giving us life and a purpose as we go about the business of loving kindness and justice that restores us to one another.

The armor that God gives us to make us strong enough to stand against the spiritual onslaught is nothing like the armor the world fashions for itself. By those standards this looks like pretty weak sauce. But as we turn to God as the source of our strength, we discover a power that is beyond all the hurtful destruction of whatever darkness we may find ourselves in. Because it is the power of love. It is the power to see with the eyes of love who our true enemy is, and more importantly who it isn’t. It is the power that not only made heaven and earth, but continually re-creates; binding up the broken hearted, breaking the chains that would bind us, and setting us free to speak words of faith, hope, and God’s infinite love.