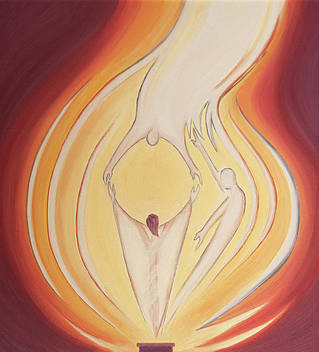 In the book of Acts, the gospel writer Luke gives a stirring account of the Day of Pentecost, a day when some say the church was born. Now to be sure, the idea of the church predates the Day of Pentecost in scripture. Jesus most famously renames Andrew’s brother Simon and then makes a pun out of it. “You are Peter,” he tells him (a name that bears a strong likeness to the word for rock), “and upon this rock I will build my church.” So before the wrestler and actor Dwayne Johnson was known as “The Rock,” Peter was, and it has something to do with Christ’s church. But once the risen Christ ascends and is no long with them, Peter and the other disciples appear to be a little speechless. They don’t know what to do, so in a haunting foreshadow of the Presbyterian process, left to their own devices they hold a kind of committee meeting to replace the role vacated by Judas in order to bring the twelve to its full numerical promise. What they experience in those ten days between Jesus’ departure and the Spirit’s arrival sounds something like what Paul describes here. They’re uncertain what comes next. They can’t see it, but they do have hope. They do have Jesus’ promise not to leave them orphaned, as he puts it in his speech to them from John that takes place the night before his crucifixion. They know there’s more to it than this, that there’s more to come, they just aren’t sure what that is. All they can do is wait for… what?

It feels like the past fourteen months have been an exercise in hoping and waiting, and not knowing quite what it is that we’re waiting for. When things first shut down, we were waiting to re-open, waiting for the curve to flatten. And it did, but not enough, and people kept getting sick and dying. One hundred thousand, two hundred thousand. Like the disciples we were stuck inside, unsure of what to do, not knowing how long we’d be there. We were waiting for the vaccine. Then we waited for it to be approved. Still we hoped. We waited for the frontline workers to get vaccinated and for our elders at risk to get vaccinated. Those of who got our first dose then had to wait for our second. And when we got that we had to wait for another fourteen days until we were fully vaccinated.  We waited for the numbers to change, for the case to go down, for the deaths to go down, to see our county go from yellow, to green, to turquoise on the State’s public health map. We waited and hope we’d be able to gather once more, maybe even take off the face masks that steamed our glasses and made us more aware than ever how much we needed to brush our teeth. Through all this waiting we groaned. We groaned with the creation that spawned this virus. We groaned as racial iniquities and excessive force were laid bare before us. We recognized that we weren’t just waiting for the redemption of our own bodies made vulnerable to an unfamiliar virus that was killing people on a massive scale. We were waiting for the redemption of black, brown, Asian and Indigenous bodies that were being disproportionately subjected to humiliation, abuse, and threats of unprovoked violence. We have known, these past fourteen months what it is to be stuck, what it is to groan while we waited, while we hoped. Even when we didn’t know what exactly we were waiting for. Even when we didn’t know what waited for us on the other side of this waiting and groaning, we hoped. And through these fourteen months that is what has saved us. That hope is what has saved us. Even though we couldn’t quite see what was coming, we knew that something was.

Like creation itself that groans for its own redemption, that groans with hurricanes and wildfires and ice storms, that groans from changes to the climate brought on by the ravenous greed and waste of humanity and its insatiable hunger for more, we hope for something better. We hope for what only God can do in putting things right; both for us and for all of creation. Really, they are one and the same. It’s not as though God is working on two tracks; one for humanity and one for everything else. We’re all groaning for the same thing. Part of the fix we’re in is that we’ve been separating the two, thinking what will be good for creation might be bad for us, and resigning ourselves to the idea that if what’s good for us is going to be bad for creation, well then so be it. That kind of thinking will never move us in the direction of the Spirit who is interceding for all of it; who is in on the redemption of all of it. Our groans are more than a complaint, more than a critical word about the world going to hell in a handbasket. They do not come from a place of hopeless despair. To paraphrase from the Broadway musical adaptation Les Miserables, it isn’t the sound of angry men (or women), but it is the music of a people and a creation who will not be slaves again because both have been set free from the bondage of sin.

On that first Day of Pentecost, when the newly reconstituted twelve and the rest of Jesus’ disciples who had stuck around waiting and hoping for what would come next were all together in one place, the Spirit blew threw them and they were no longer speechless. Without understanding just how it was happening, they were filled with the words that someone else needed to hear. It turned out that what came next would be less about what their faith could do for them and more about what God was unleashing into the world through them; a Spirit of wisdom and understanding, a Spirit that could bridge the barriers of language and culture, nations and borders to speak God’s deeds of power in whatever language was needed. On this day of Pentecost, we continue to celebrate that same Spirit that comes in answer to our hoping and waiting. When we pray, “Come, Holy Spirit,” we are asking for the power of God that enables us to speak to the hope that is within us, the hope that saves us. And not just for ourselves, but for whoever needs to hear it, in whatever language they can understand. It might not be the language of the church. It might be the language of the street, or the boardroom, or the home.

We are asking because we are aware of the all the barriers that make it hard to hear one another, all the divisions and differences that make it hard to know what to say, or how to say it. We are asking because we don’t even know what to say for ourselves, how to articulate the deepest needs of our own souls in prayer to God.   As spectacular as the vision of Pentecost is, with its violent wind and tongues of fire and disciples declaring God’s deeds of power in any language imaginable, perhaps the most powerful promise of the Spirit is the one we’ve learned over these past fourteen months. Along with all of our groaning and hoping and waiting, we prayed. Only, I don’t know about you, but many times I didn’t know what to pray for. Of course, we prayed for the sick and the dying. We prayed for those working the front lines of this disease in health care, and education, and food service. We prayed for an end to the pandemic, to be sure. But those groans, that hope, there was something deeper than all the words that we did have. Maybe the deepest part of ourselves, the place where the Spirit always dwells, translating and finding the words for us when we are speechless.