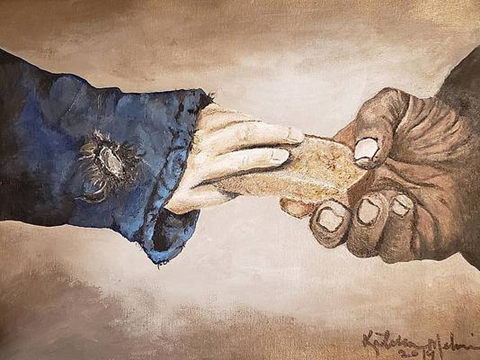 One of the more well-known lines of Shakespearean drama comes from the first act of the tragedy Hamlet. It also happens to be the least understood. Much like a verse of scripture quoted out of context, this line is intoned with great solemnity. “This above all else, to thine ownself be true.” Unfortunately, the line loses much of its heft when one hears it in performance. That’s because it is uttered by the ridiculously pompous advisor to the crown, Polonius. It comes as one of a string of precepts that Polonius, the father, imparts upon his son Laertes before the young man departs for France. He is the caricature of the doting father doling out endless advice. “Be thou familiar, but by no means vulgar. Give every man thy ear, but few they voice. Take each man’s censure, but reserve thy judgment. The apparel oft proclaims the man. Neither a borrower, nor a lender be.” On and on he goes, landing finally on, “to thine ownself be true,” which takes on a measure of irony given all the direction that’s just been dispensed. If the young man proceeds according to everything that his father has just told him, how can he possibly be true to himself? He’ll be too busy trying to live up to the wisdom his father has just imparted.

There is no shortage of this kind of proverbial wisdom in the world; from Shakespeare’s Polonius, to Benjamin Franklin’s Poor Richard, to Everything I Need to Know I Leaned in Kindegarten and Chicken Soup for the Soul. Then there is the book of Proverbs, a collection of ancient near eastern wisdom attributed to Solomon, that also reflects some of the ethos of the much later post-exilic Judaism. The perennial popularity of such wisdom is a testament to how desperate we are for it. It might be that we’re not so much looking for the wisdom we don’t have as we are looking for something that confirms what little wisdom we think we do know, something that confirms what we’ve always suspected to be true. On the other hand, more than longing to be wise, or to have our own wisdom confirmed, we are eager to avoid being a fool. Maybe that’s what makes Polonius’ monologue to his son all the more ridiculous, because as the play unfolds it becomes clear that he is the fool of the piece. No one wants to play the fool unwittingly. No one wants to be regarded as foolish.

A friend was confessing to me the other day that he had blown up at his family. He was embarrassed to admit it and was quick to make amends when the whole thing had passed. It all came about because as he tried to relate an anecdote about the lineage of a particular rock and roll band, he couldn’t keep the names of the musicians and their bands strait. His family began to tease him about it and he blew up at them. “I was trying to figure out why I got so mad,” he told me, “and then I realized it was because I felt foolish, that I looked like some foolish old guy who clearly didn’t know what he was talking about.”

To avoid being the fool, we might start by pointing out that not all wisdom is equal. For instance, when it comes to wealth, Ben Franklin’s alter ego Richard Saunders would tell you that, “Not to oversee workmen is to leave them your purse open,” or, “If you would be wealthy think of saving as well as getting: The Indies have not made Spain rich because her outgoes are greater than her incomes.” And, “Buy what thou has no need of and ere long thou shall sell thy necessaries.” Clearly, for Poor Richard, what makes a person wise is holding onto their wealth. Likewise, foolishness is what makes a person poor. This is the wisdom that our nation and our culture are built on. But that wisdom is challenged by our verses from the book of Proverbs, which, instead of confirming the conventions of our own thinking often offers the kind of wisdom that pushes back against it, “A good name is to be chosen rather than great riches,” and that, “favor is better than silver or gold.” This biblical wisdom goes down less like the comfort of chicken soup and more like the heat of a good New Mexico green chile stew.

I read a newspaper feature years ago about a woman who had to rebuild her life when her marriage fell apart. In doing so, she had to come to terms with some of the assumptions she had made while enjoying the affluent lifestyle her husband’s wealth had made possible. “Of course I thought I was better than the poor people I’d pass while driving down the street,” she confessed, “I was driving a Mercedes and they weren’t.” It wasn’t until her divorce left her struggling to get by from month to month that she came to see the wisdom of the Proverbs. “The rich and the poor have this in common: the Lord is the maker of them all.”

As it turns out, according to the wisdom of God’s Word, there is something better than wealth for its own sake. And something far worse than being poor. In fact, biblically speaking, wealth for its own sake, conspicuous wealth that comes at the expense of the poor, that participates and profits from fleecing those who are already poor, ensuring that they remain that way is a form of injustice. In the classic novel To Kill a Mockingbird, Atticus Finch teaches a form of this truth to his son Jem. “As you grow older,” he tells Jem, “you’ll see white men cheat black men every day of your life, but let me tell you something and don’t you forget it – whenever a white man does that to a black man, no matter who he is, how rich he is, or how fine a family he comes from, that white man is trash.” But it isn’t just a question of race, although that cannot be overlooked. It’s also question of rich and poor. One of the big news stories this summer as we began to emerge from the pandemic, before the Delta variant of the virus rears its head, was the difficulty employers were having hiring people back to work. Particularly in the service sector of the economy, restaurants and hotels. During the pandemic, the generous Paycheck Protection Program kept many businesses afloat but didn’t always cover those workers and they lost their jobs. Unemployment assistance filled the gap and kept them from going completely under. The benefits weren’t extraordinary, but sadly they were often more than what the working poor had been making in their jobs. The shutdown gave them the time to re-examine how they made their living, and the kind of life it left them with. Even when the benefits ran out, many chose not to go back to jobs that offered poor working conditions, little benefits and a wage that was well below the poverty level. “Whoever sows injustice,” reads the Proverbs, “reaps calamity.” Chronically underpaying for the labor of the poor is not without its consequences.

The hard truth of the biblical wisdom that comes to us from Proverbs is that because both rich and poor are made alike in the image of God, and because the poor are more vulnerable to abuse and exploitation, God is always on the side of the poor against those who would leave them destitute, those who would keep them poor and always in need. Likewise there is no blessing for the wealthy who refuse to share out of their abundance, but would hoard what they have for themselves, caring more for their riches than for the neighbor in need, or the worker barely making ends meet. The blessing of God is always to be found when those with more give what they can to those with less; when we extend a hand to the people of Haiti shaken by the earthquake, when we come alongside the people from Louisiana to the northeast recovering from the damage of hurricane Ida; when we welcome the asylum seeker from Central America or the refugee from Afghanistan who come with little more than the clothes on their backs. But more than that the blessing of God comes when we see ourselves in the face of the poor, when we advocate for and offer a living wage for work that we value and looks for ways to not only share our bread, but also our power so that the imbalances that allow poverty to persist might be brought to an end as well. To do otherwise would be nothing short of foolish.