Click here to view the sermon video for September 6, 2020. 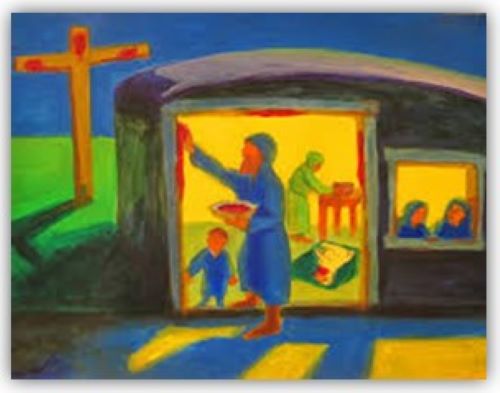 The Passover is rooted in one of those biblical stories that we try not to pay too close attention to. On the one hand it is the culmination of a series of acts of God that unfold against Egypt and its Pharaoh on behalf of the Hebrew slaves who have been crying out. As God explains to the fugitive Moses at the burning bush, God has seen, heard, and knows about their suffering, and is going to do something about it. The first part of God’s plan is to send Moses back to the royal Egyptian court in which he was raised on behalf of the enslaved people from whom he came. It isn’t just that the people are enslaved to the hard labor of brick production for Pharaoh’s monuments. They are enslaved to the Egyptian gods who demand such monuments. monuments built on the backs of their slave labor. Moses wants Pharaoh to allow the people to worship the God of their forefathers; the God of Abraham, Isaac, and Jacob, the One who self-identifies to Moses as I AM, or better translated I will cause to be what I will cause to be.

Pharaoh refuses, and in response to this refusal God unleashes a series of plagues: locusts, frogs, darkness and more. Soon Pharaoh starts to relent, only to change his mind and refuse once more. So, the plagues keep coming. Until the final one.

That’s where we prefer to stop reading. That’s where the escalation of plagues reaches a breaking point that even we don’t feel comfortable endorsing. Because what God is about to cause to be is devastating, and we begin to wonder if this is someone we really want to associate with, a God we truly want to worship. The final plague, as it is described to Moses and his brother Aaron, will be God passing through the land of Egypt in judgement against its gods, killing every first born, both human and animal alike. It will be the last straw and the people will finally be allowed to go, but it will come at a very high price.

A couple of weeks ago, Frank began a Sunday school class over Zoom titled Prophets and Kings exploring the dynamic tension between the prophetic tradition and the rulers of Israel as described in Hebrew scripture. As is often the case when studying these ancient stories, the question was raised about the wrathful character of God in these stories and the bloody outcomes that often result. While we might all agree that the oppressive enslavement of people is wrong, that can’t make the indiscriminate death of firstborn humans and animals right, can it? Why does it have to come to this? It’s at this point that many Christians, unable to stomach these kinds of outcomes, decide they want nothing to do with this God, and imagine that with the coming of Jesus, God must have undergone some kind of personality transplant. Nothing, or course, could be further from the truth. The God revealed to us in the face of Christ and the God who dictates the terms of the Passover are one and the same.

So much of our own story about the death and resurrection of Jesus is framed by the story of the Passover. It is no accident that the events leading to his crucifixion take place against the celebration of the Passover festival. We may call the day of resurrection “Easter,” a word whose origin in English comes from pagan fertility practices associated with the dawn, but most languages use a word derived from some form of the word for Passover. To talk about Jesus as the lamb of God is invoke the imagery of this passage. To speak of the blood of his cross is an allusion to the blood of the lamb on the doorposts and lintel that saves the people from God’s terrible judgment. To understand our own liberation from the enslavement of sin, we turn to this prototype of liberation from Israel’s own enslavement. This story is our story.

Upon closer examination, there are two important takeaways. The first is that there is a limit to the injustice that God will allow. It’s hard to have it both ways. In the face of injustice, pain and suffering we ask why God doesn’t do something about these things. But then when God does do something about it, we get squeamish with the results. It isn’t as though this is the first plague. It is the last, the tenth and final plague. There had been nine plagues before, nine warnings to Pharaoh and the people of Egypt, nine opportunities to relent and let the people go and worship God. As bad as those plagues might have been, the prospect of losing their labor force was always so much worse. Who would do what they would not, perhaps what they could not do? Who would break their backs to build their cities, tend their children, harvest their crops, clean their homes, lay the track for their railroads? What were we talking about? Are we sure that it is God who is so terrible? Or is there a limit to the injustice piled upon injustice that God is willing to allow us to inflict on one another before stepping in?

The truth is that when God passes through the land, a judgement is rendered on the people and a society unwilling to see the ways in which they benefit from the exploitation and enslavement of others even if they imagine themselves to be innocent of any actual crime. But more than that, God tells Moses and Aaron that this act constitutes a judgment on Egypt’s gods. It is a judgment on what the Egyptians value, what they worship, and how such worship enables and justifies their oppression of God’s people.

The second takeaway has to do with the part we’re likely to gloss over on our way to all the dramatics, and that has to do with the very detailed instructions given to Moses and Aaron regarding the lamb to be eaten prior to their departure. Because, while on the surface it may sound extraneous, or inconsequential to what will come next, it is a ritual act that calls to mind all that the people will need to know about what this event means for them not just now but into the future that God is preparing for them.

To commemorate what is about to happen the people are instructed to take a lamb for each household. But what if a family is too small for an entire lamb? What goes unsaid, what if they are too poor? The instruction is clear. They are to join another family and pool their resources. No one is to be left out. The salvation of God is for the whole of the people. Likewise, the lamb is to be divided proportionately among those who will eat it. Not only is no one to be left out, no one is to receive more than another. The requirement that the lamb be without blemish signals that this is no ordinary meal, but a sacrificial one. A sacrifice is being made, not to appease an angry God but in gratitude for the unblemished gift of life that comes from God and God alone. The blood that will mark the doorposts and the lintel of the houses is a sign of life that withstands and is preserved amidst the onslaught of destruction to come. Likewise, the lamb is to be roasted over a fire because that is how sacrifices were offered, by burning them on an altar to God. Finally, and perhaps most importantly, the whole ritual is to be done in a state of readiness: robes tucked, sandals on, staff in hand. There is an urgency to it all that communicates the insistent movement of God in setting the people free. At its best, this is what ritual does. Each of the details connects us with the story that saves us, the story that has claimed us, the story that defines who we are and whose we are. It brings order to an existence that is so often disordered. These are a people whose entire lives are about to be turned upside down. Every familiar reference will be stripped away, and all that they once knew will be gone. In such times and circumstances, it will be critically important to have something like this ritual meal to remind the people of the story that brought them out of the land of Egypt. Not only will it sustain the people as they pass through the wilderness on their way to the land that God has promised. It will sustain them through their exile when they once again find themselves held captive to a foreign power. And it will sustain the followers of Jesus as they come to their ritual meal to understand his sacrificial death as a sign of their own liberation from the sin that holds them captive, a reminder of the life that is preserved amidst the onslaught of destruction. The ritual sustains us by pointing to the God who not only passes through in judgment, but who also passes over in mercy. Justice and mercy are not mutually exclusive, the two go hand in hand. As the medieval scholar Thomas Aquinas observed, “mercy without justice is the mother of dissolution; justice without mercy is cruelty.” God is neither dissolute, nor is God cruel. We are saved by God’s justice from all that would enslave us and rescued by God’s mercy from all that would destroy us.

In the disorder of these days of distance and isolation, of violence and division, this is the good news that defines both who we and whose we are with the same insistent urgency that sets us free.