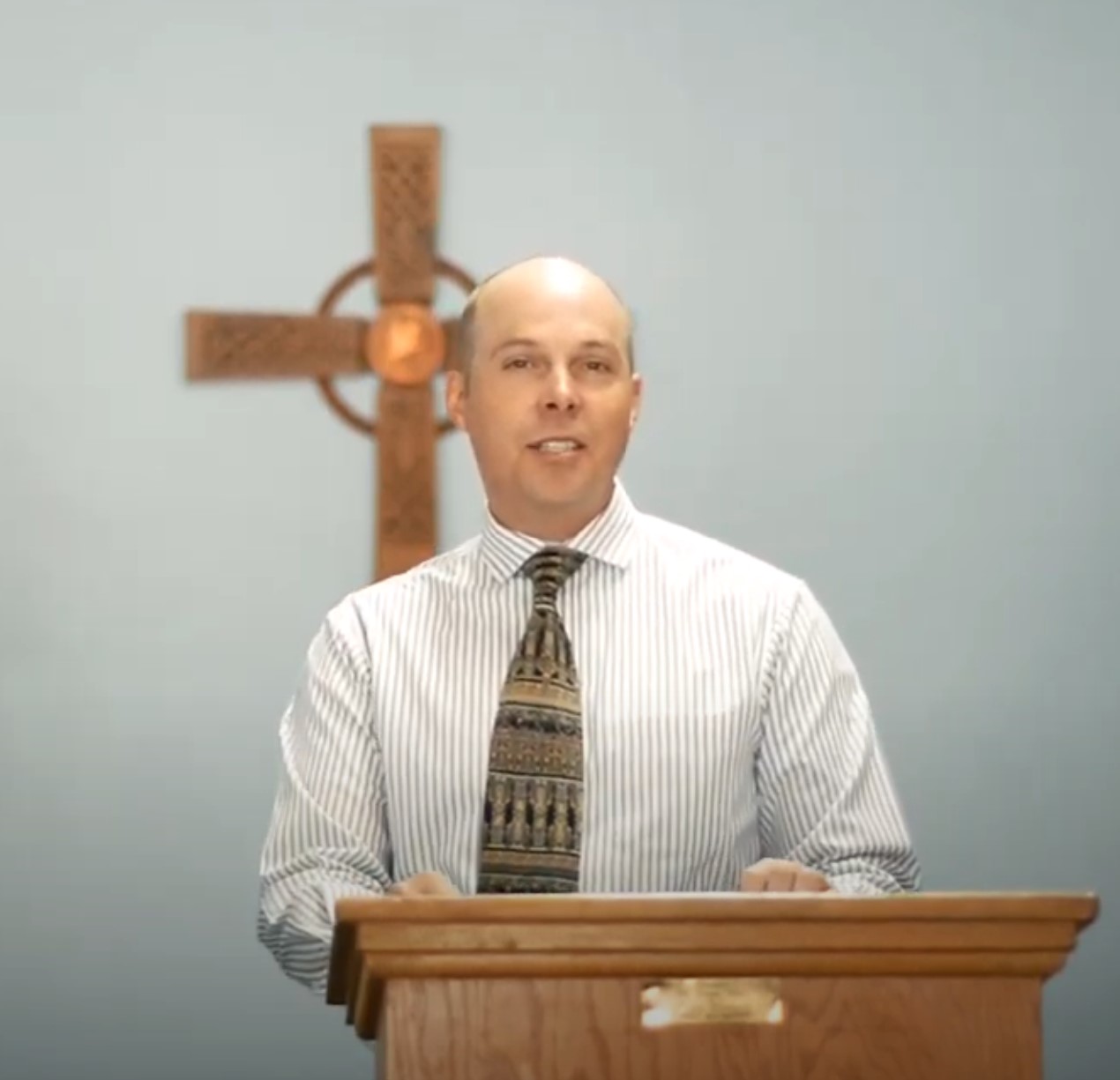 A little over twenty-one years ago, my wife, Marie, and I were sitting together in church. This was well before my becoming a pastor, so we were still able to sit together for church. In fact, at that point we didn’t even have a clear plan for attending seminary, other than a feeling that I might be called to serve the church as a pastor, and that required seminary. No, on that particular Sunday morning we were just your average young couple, sitting in our downtown church, listening to the sermon, when suddenly Marie squeezed my hand. Hard. I turned to her and she looked at me and then looked down at her very pregnant belly and her eyes got wide. The hour had come. Well, almost. I mean, it was her first contraction and it signaled the beginning of the end of the past nine months of praying, hoping and wondering about this brand-new human who was about to expand our family of two to a family of three. There in the church, during worship, the hour had come, but there would be another nineteen more until the main event of our baby’s arrival. Filled with excitement, we left church at the end of the service and went home. It was too soon to go to the hospital. Our neighbor’s son was turning three, so we went to the birthday party. The tiny patches of grass in the front and back yards of the house needed to be cut, so I mowed them. Marie took a bath.  All the time we monitored the frequency of her contractions until at midnight, some twelve hours after we left church, we made our way to the hospital following the route we’d already mapped out and practiced in anticipation of this moment.

Toward the beginning of John’s gospel, Jesus attends a wedding in Cana. You might know the story. They run out of wine. It’s all terribly embarrassing. Hospitality is everything in middle-eastern culture, so to run out of wine for the guests celebrating something as joyful and important as a wedding would have reflected poorly on the family hosting the celebration. Jesus’s mother must have been a friend of the family. She wanted to spare them the embarrassment, so she asked Jesus to do something about the situation. His answer was not something any mother wants to hear. “Woman,” he said, “what concern is that to you and to me?” I know. He kind of sounds like a jerk. Who talks to their mother like that? But I suppose he’s annoyed in the way that most children get annoyed when their parents think they should be doing something that they’re not. Then he adds, “My hour has not yet come.” It’s a little cryptic. What does he mean his hour has not yet come? And anyway, he fixes the wine situation, so it’s a little unclear. Except that phrase comes around again. Much later, after any number of signs like his trick of turning jugs of water into wine, Jesus makes his way to Jerusalem with the students who have become his friends for the Jewish feast of the Passover. While they’re there, a couple of foreigners, Greeks, approach his disciples saying they want to see Jesus. When they tell him about the request he says, “the hour has come for the Son of Man to be glorified.” This was it. This was the moment they had all been waiting for, like the first contraction signaling that labor has begun.

I can remember naively asking my wife’s OB what it was that got labor going. “If I knew that,” he answered wryly, “I’d win the Nobel Prize and never have to get up in the middle of the night to deliver another baby.” What was it in that moment when Jesus was told about the foreigners asking for him that made him know that the hour had come? Most times, the pivotal moments of our lives that send us down a whole new path aren’t announced quite as obviously as a contraction, or the breaking of water. It’s usually only in retrospect that we can see, that was it. That was the moment of truth. That conversation, that phone call, that positive word, that clear failure, that missed opportunity, that bottoming out on the bathroom floor; that was when it all began to change. That was when I knew things would be different. They don’t come with any clear label, so they’re hard to spot at the time.

Maybe it was the fact that he’d risen to their attention. In the other gospel stories, Jesus has a habit of doing something miraculous- casting out a demon, healing a leper- and then telling people not to tell anyone about it. It’s almost as though he knew that he’d only be able to fly under the radar of the world’s attention for so long, and once he had their attention, the powers that be weren’t going to be as receptive to what he was saying and doing as the people who were eager to see the reign of God at work in the world. That might be why he was so short with his own mom. He didn’t want to call too much attention to himself that soon in the game. But now, in the big city, word had reached these two strangers who were there from out of town, and they came looking for him. Not long ago I listened to a podcast conversation with the actor Leonardo DiCaprio. As such conversations often do, they spent some time talking about the actor’s rise to fame, the TV guest roles, the small movies. The host asked him, when did you know that this was going to be a thing for you. When did you know that this would change your life? He said it was shortly after the movie Titanic was released, as it began to become this worldwide phenomenon. He walked out the front door of his place to find paparazzi vehicles waiting to follow him, take his picture. Titanic is his seventeenth credit in film and television. It took seventeen different credits, including one of the highest grossing films of all time before he knew, before he rose to the level of attention that would forever alter his life. Jesus wasn’t an actor. He’s God’s son; God with us, in the flesh, one of us. He’d spent several years teaching and healing and feeding people. He’d spent years walking and talking and trying to point people toward the way in which God was actively at work to put things right. And once those two strangers showed up at the Passover in Jerusalem out of nowhere, he knew that the time had arrived that would change everything.

Now he’s acknowledging it to God in this prayer. It’s one thing to suspect that the moment of truth is at hand, that the hour has come. It’s another thing to say it out loud to God, to lean in spiritually to what that means. The hour has come and the Son is asking to be glorified. Only, we know that what passes for glory in the world and what Jesus talks about as glorification are two very different things. What passes for glory in the world is fame, adulation and accolades. What passes for glory in the world often comes with paparazzi and press. But when Jesus talks about being glorified, he’s talking about crucifixion. He’s talking about shame, despair and defeat. By the world’s standard, none of that is very glorious. That is the hour that is at hand. That is the moment of truth that changes everything. Because more than anything, what it means that the hour is at hand is that something critical is revealed, something essential to life is made real in a way that cannot be made unreal. What we come to know in the glorification that Jesus is talking about, we can’t un-know. What we see on the cross, we cannot un-see. What we know, what we see is that God is with us. Not with us in some abstract cloud and fire kind of way, but with us in in the flesh and blood existence of humanity; the kind of existence that hurts and bleeds and cries out in pain. God is with us as one of us. God knows us, from the inside. And we come to know God. We are made one through him, through Jesus. In that act of divine solidarity with us, for us, as one of us, we are shown our inextricable solidarity with one another. We are in this together. Not just a pandemic, or whatever other crisis the moment may bring. We are in this world, this life, this flesh-and-blood existence together. The hour that comes strips away any illusion we may have that we are on our own. Certainly, that is what this pandemic has done. The isolation and the distance have only served to heighten our awareness of how much we need each other. The need for safe practices and face masks in public are a reminder that my safety, my health is dependent on what you do just as much as your safety and health is dependent on what I do.  The moment of truth when we come to know God as the one who knows, loves and has become one with us; when we come to know that we belong to one another every bit as much as we belong to God, that is the moment when eternal life begins. That is the beginning of a whole new way of life, when something new is born, and nothing will ever be the same. Alleluia, amen.